The Springfield Central Cultural District is proud to have sponsored a new “Cultural and Walking Tour Map” of Downtown Springfield, MA! The image below shows a map of the cultural district in Springfield and highlights historical, artistic, architectural, and cultural locations Downtown. It’s a tool that can be used by visitors to plan their trip or residents to learn more about their city. Maps are available at all Downtown hotels, visitors centers, and cultural institutions (check out their locations on the map!).

Take a walk through our cultural district and share with us what you see on our social media @sfldculture or using #ExperienceTheUnexpected. 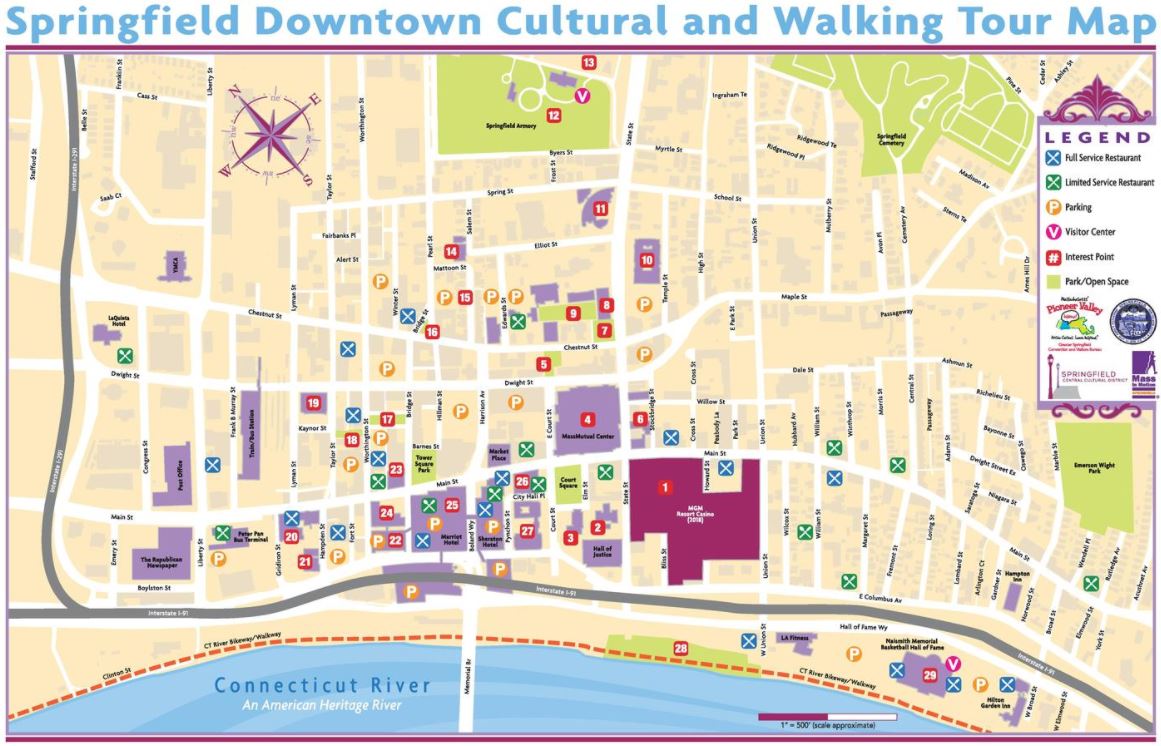 Fresh Paint Springfield, produced by the non-profit Common Wealth Murals, has organized the installation of 19 murals throughout downtown Springfield: ten in 2019 and nine more in 2021. 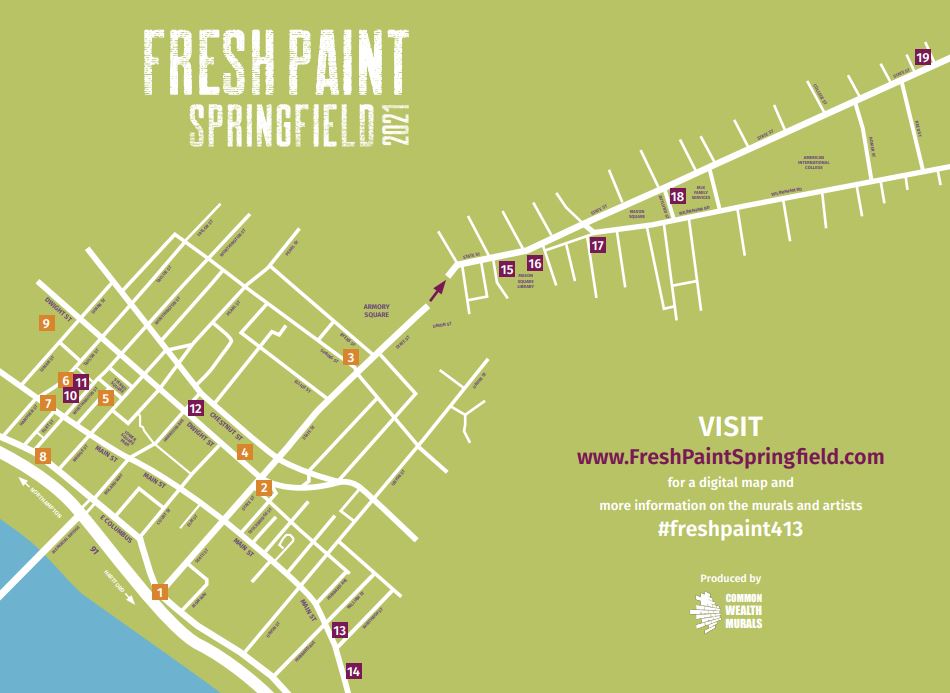 2. HH Richardson Courthouse (1874), The current home of the housing and juvenile courts is one of the two surviving Springfield buildings designed by the great American architect Henry Hobson Richardson. Capturing both Italian and Romanesque forms, the building’s central tower is modeled on Pallazo Vecchio of Florence, Italy.

3. Old First Church (1819), Court Square. This church was designed and constructed by master builder Isaac Damon of Northampton to be the fourth meetinghouse of a congregation that dated back to 1637. It is sophisticated early Classical revival style. Its copper rooster weathervane was made in 1750 in London and was presented as a gift to Massachusetts. Court Square has long been the religious and governmental center of Springfield. Citizens acquired the land in 1812 to attract the newly formed Hampden County government. Behind Old First Church is the President McKinley Memorial, sculpted by Philip Martiny, a student of August Saint-Gaudens.

4. MassMutual Center, Main Street and Falcons Way. This facility contains convention space, ballrooms, and a large arena, which is home to the Springfield Thunderbirds AHL hockey team. For more information and tickets call: 413.787.6610.

5. Pynchon Plaza (1977), between Dwight and Chestnut Streets. This urban pocket park features the sculpture Everglades by Isaac Witkin. Named for William Pynchon, founder of Springfield in 1636, Pynchon Plaza is a hillside park meant to connect downtown with the Springfield Museums.

7. Puritan Statue (1899), Merrick Park State and Chestnut Streets. Since 1899, this small park has been home to the statue of Deacon Samuel Chapin, a founder of Springfield. Augustus Saint-Gaudens, one of the greatest American sculptors, designed the statue while noted architect Stanford White designed the granite pedestal.

• Springfield Science Museum – Be sure to visit the Seymour Planetarium and Dinosaur Hall with a replica of a tyrannosaurus rex.

• Dr. Seuss National Memorial Sculpture Garden – Children’s book author Theodore Geisel, aka Dr. Seuss, was born in Springfield. His first book, And to Think That I Saw It On Mulberry Street, was filled with impressions from his Springfield childhood. Lark Grey Dimond-Cates, Geisel’s stepdaughter, sculpted the bronze figures of Geisel and some of his most beloved characters.
For more information call the Museums Welcome Center: 413.263.6800.

10. Classical Condominiums (1897), 235 State Street. This large Renaissance Revival building was designed by the Boston firm of Hartwell, Richardson and Driver. Originally called “Central” High School, a large western addition was designed by H.L. Sprague in the 1920s. Renamed “Classical” in 1934, the school was closed in 1986 and now is home to condominiums and Art for the Soul Gallery.

13. Springfield Technical Community College, Armory Square. Founded in 1967, STCC is the only technical community college in the state. Performing and visual arts spaces include the Amy H. Carberry Fine Arts Gallery and the Scibelli Hall Theater.

14. Hispanic Baptist Church (1872), 18 Salem Street. Originally known as North Congregational Church, this building was designed by Henry Hobson Richardson and is one of the most important landmarks in Springfield. The brownstone edifice features a 150-foot stone tower and Tiffany window.

15. Historic Mattoon Area, Mattoon and Elliot Streets. Developed between 1870 and 1890, this is one of few remaining intact areas lined with Victorian row houses that can be found in all of Western Massachusetts. Mattoon Street is often considered to be one of Springfield’s prettiest streets.

16. Apremont Triangle Area, Pearl and Chestnut Streets. This plaza is dedicated to the 104th Regiment that distinguished itself at the Battle of Apremont during World War I. Around it a grouping of early 20th century buildings including the former Rolls Royce dealership, a one-time manufacturer of cars in Springfield.

17. Stearns Square (1881), Worthington and Bridge Streets. Famous sculptor Augustus Saint-Gaudens and architect Stanford White designed the park around Saint-Gaudens’ statue of Deacon Samuel Chapin, one of the founders of Springfield. Known as The Puritan, this statue is regarded as one of Saint-Gaudens’ finest works. In 1899 the statue and pedestal were moved to Merrick Park.

18. Duryea Way, between Worthington and Taylor Streets. A copy of a Duryea car by Richard Stevens marks the location where Frank and Charles Duryea created America’s first gas powered automobile in 1893. A Duryea car built in the nearby Stacy Building at 41 Taylor Street won the 1895 Times-Herald Race, the first automobile race in America.

24. Gallery Space at 1550 Main. This expansive lobby in a former Federal Courthouse, features small and medium works by local metal sculptor James Kitchen, whose work can also be found throughout downtown.

• UMass Center at Springfield is the hub for classes offered by the University of Massachusetts in Springfield, featuring fourteen multiuse classrooms and state of the art nursing facilities.

26. 1350 Main Gallery, Studio 9 and Springfield Symphony Orchestra Box Office (SSO). A lively art display is on view on the ground and ninth floors while the 35-ft tall Birdicus Giganticus by James Kitchen enlivens its north plaza. This building is also home to Spirit of Springfield, an organization that sponsors community events such as the World’s Largest Pancake Breakfast, and Teatro Vida, a local organization building youth leadership through the arts.

The SSO is the largest Massachusetts symphony outside Boston and holds seven classical and four pops performances at Symphony Hall each season. For more information and tickets call: 413.733.2291.

27. City Hall, Campanile, and Symphony Hall (1909), Court Street. After the first city hall burned in 1905, the city conducted a national competition and selected a design by Pell and Corbett of New York. President Taft gave the address at the 1913 dedication ceremony. City and Symphony Halls are Neo-Classical while the Campanile is similar to the bell tower of St Mark’s in Venice, Italy. Be sure to visit City Hall’s marble lobby and ornate second floor meeting rooms. Symphony Hall is the venue for the Springfield Symphony Orchestra and Springfield Public Forum as well as travelling musicals and concerts.

29. Naismith Memorial Basketball Hall of Fame, 1000 Hall of Fame Way. The Basketball Hall of Fame is a world–class museum complex highlighting the history of basketball and more than 300 inductees. The sport was invented in 1891 at Springfield College by Dr. James Naismith. The museum delights sports fans from around the world with its many interactive exhibits. The complex is also home to numerous restaurants and function spaces. For more information and tickets call: 1.877.446.6752.