IN NEED OF A VENUE FOR YOUR EVENT, PERFORMANCE OR SHOW? LOOK NO FURTHER THAN SPRINGFIELD!

Below are a selection of Springfield venues. For more, browse our Resource Directory.

Art for the Soul Gallery

Arts & Economic Prosperity 5 is Americans for the Arts’ fifth study of the nonprofit arts and culture industry’s impact on the economy. Read the Economic Impact of Nonprofit Arts and Cultural Organizations and Their Audiences in the City of Springfield, MA (Fiscal Year 2015). 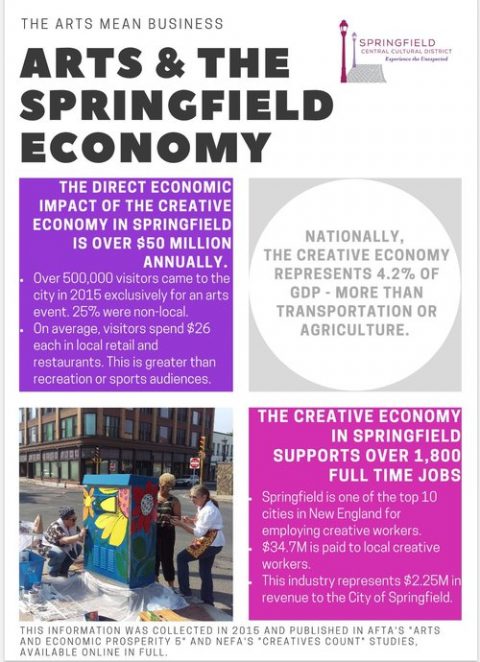 “UNCTAD has introduced the topic of the “creative economy” in the world economic and development agenda.

The creative economy is an emerging concept dealing with the interface between creativity, culture, economics and technology in a contemporary world dominated by images, sounds, texts and symbols.

Today, the creative industries are among the most dynamic sectors in the world economy providing new opportunities for developing countries to leapfrog into emerging high-growth areas of the world economy.

In implementing its mandate, UNCTAD has been proactive in promoting international action in the area of the creative industries, and hence, the creative economy, emphasizing their development dimension.

The creative industries are at the crossroads of the arts, culture, business and technology. All these activities are intensive in creative skills and can generate income through trade and intellectual property rights.”